Skip to content
Past Events
May 6, 2020 Cota Kenya No Comments

The main peace activities done included: asking the residents of Dandora phase 4 area, that was severely hit by 2007-2008 post-election violence to sign and pledge to maintain peace during the election period, after engaging and training them. We obtained 1,000 signatures, and it reduced drastically, we also linked youths and women to opportunities and training to be taught entrepreneurship and given loans. We intend to empower the youth, children, and community to become agents of positive social transformation that we came about with this project.

The exercise took place before the general election that took place on 4th March 2013, and the peace ambassadors continued to engage fellow youths around Dandora phase four.

The exercise started in early January 2013 and ended on 30th March 2013. One of the factors that made the task successful was the alternatives provided by the actors, which included training on loan applications and conflict resolution management techniques.

Two wrongs do not make a right, and violence is never the sure path to solve a problem. Having been in the informal settlements of Dandora, filled with violent crimes, then we are in the best position to lead the whole society in finding the best way to solve disagreements without casualties!

Speaking at the end of the program, CPA. Jobiese Richard thanked the youths for taking a leading role in being peace champions, pointing that when they are involved in finding solutions to local problems, then a society’s foundations are firmly placed. He further asked the elected leaders to work with youths. And continue empowering them by awarding them tenders to the qualified ones as this is part of community responsibility that every one of us must undertake if we want to see nation-building and improvement in the economy of the country. 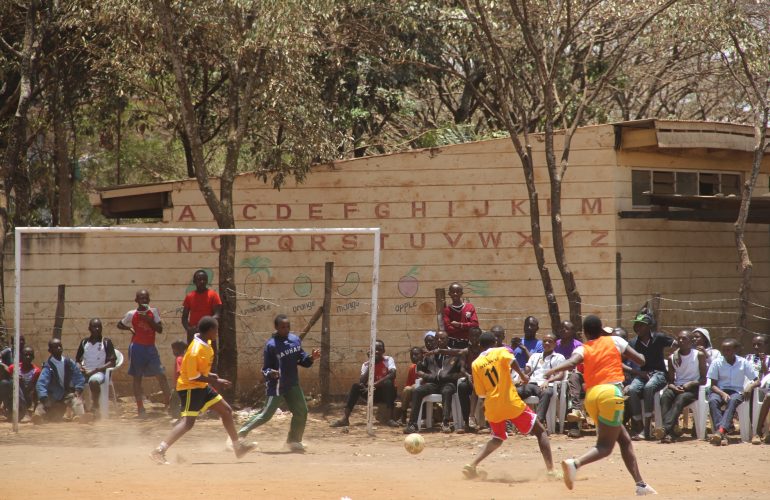 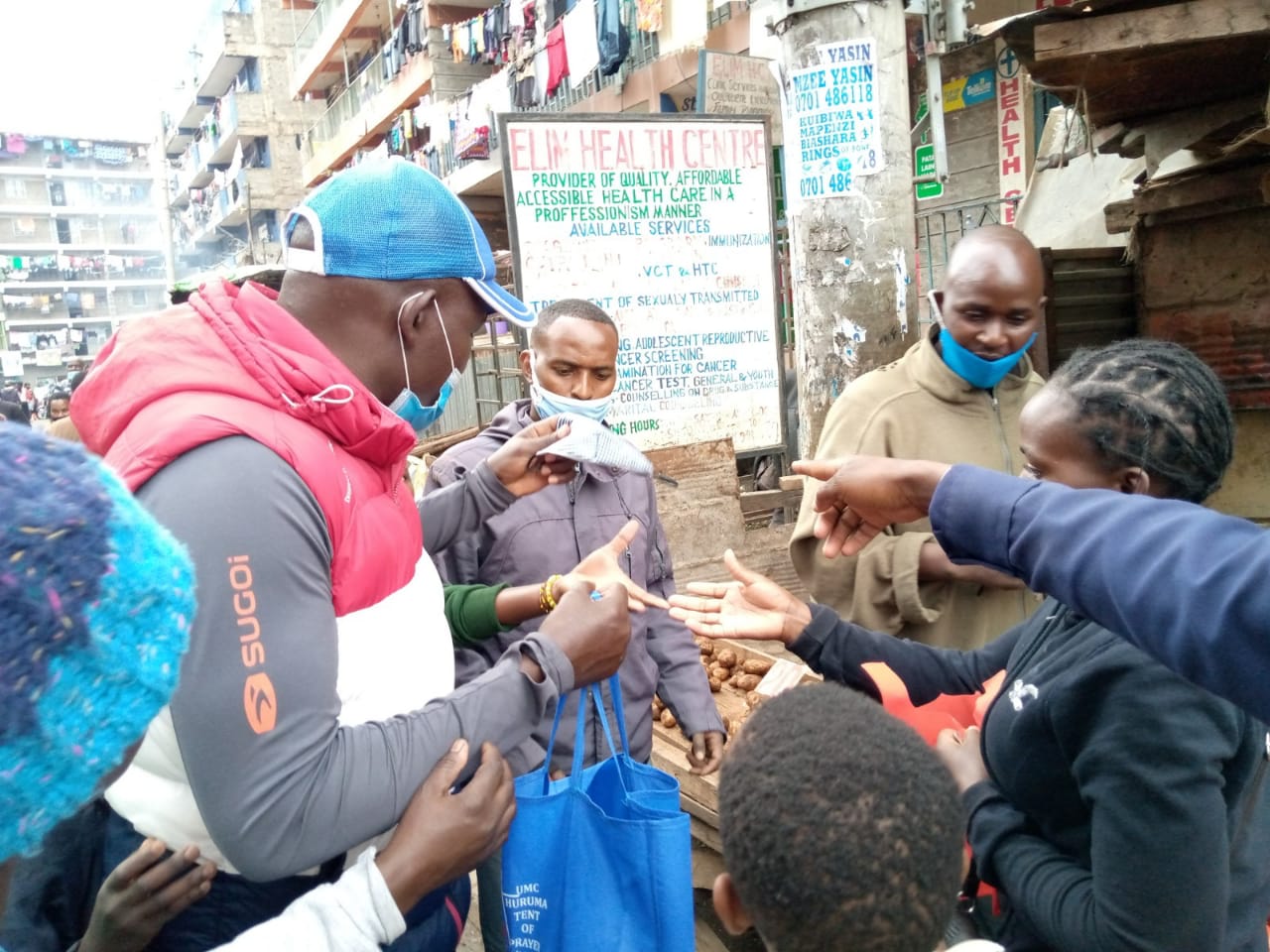 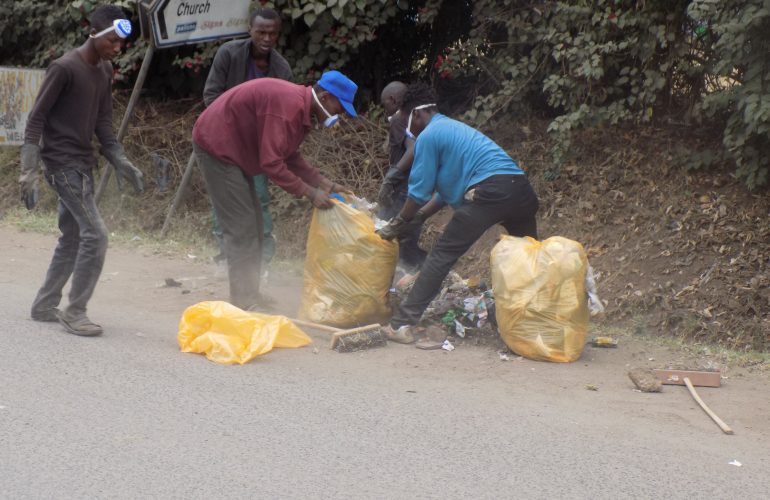 The cleanup took place on the 2nd of September 2015,  it was flagged of by the Chief on behalf of the District Officer.

There were 125 people, with speeches from the Youth leaders, Area ward manager, Chief then were all divided ourselves into three groups.

The area cleaned involved, unblocking trenches, cleaning the roads, piling the garbage together and putting them in a sack, then the lorries from the Nairobi City County and the one from National Youth Service collected the garbage. The areas were marked and the house holds given plastic bags and tools so that the cleanup could be maintained, and youths empowered to collect garbage at a fee.

The area chief asked youths to collaborate with the local administration, community to desist from crime as they now had no excuse because they were given tools and capital to engage in collecting garbage from houses at a small fee.

The achievements realized included; Youth groups from different gangs worked together for they were mixed up with the others, and community confidence was upheld, the County Council got a chance to link up with the youths and will now work together in future cleanups, even if they have not been organized by COTA, the shops around the trenches now have youths to reach on issues to do with cleanups.

Safisha mtaa project, is a COTA initiative to create environment awareness among the community and unite the youths who have been divided along gang, tribal and idle groups, to be responsible and be positive change agents.

The seminar took place on the 4th of September 2015 at Dandora social hall. COTA invited different facilitators including: The National Authority for the Campaign Against Alcohol and Drug Abuse, Sheikh Hassan Kilele and Sheikh Ibrahim and Youth fund.

The first Session was Effects of Drugs and substance abuse by Mr. Jacob, Programs Officer from NACADA. He explicitly talked about drugs and substance abuse. Others were also happy to know of the facts associated with the drugs, apart from the drug abuse suppressing the nervous system and hallucinations many other thing were learnt in the forum Example: bang does not stay in the human brain for seven years but for a lifetime, causes infertility, shrinking of the penis and continuous urinating without breaks. Other results are overworking and over eating. Miraa cause infertility. Wines are alcoholic, lead to impotence, many thought that ‘shisha’ is just a flavor for fun, but the facts are that one puff of ‘shisha’ is equivalent to 10 sticks of cigarettes. Tobacco causes respiratory complications, and lung cancer.

Hence, they were given the toll-free number to call in case of anything 1192 or have difficulty in stopping the vice.

The second session was Youth radicalization and violent extremism by Sheikh Hassan Kilele and Sheikh Ibrahim.

They answered participants questions and ironed out the misconceptions.

Radicalization is a process by which an individual or group comes to adopt extreme political, social or religious ideals that rejects freedom of choice. It is mans’ thoughts and not anything that the Muslim faith teaches. It is any philosophy that goes opposite or promotes violent extremism

It was noted that there have been instances in Dandora of youths and young generation getting lost while others radicalized because they are greedy for money, fame and power. Hence, given false information like they are promised money once they join and complete the activity, and the young girls are told that they will be married off to wealthy men. Other reasons are; idleness, unemployment and for fun.

The sheikhs defined ‘JIHAD’ as to defend one self and it resulted in the time when the Muslims were being oppressed, hence they protected themselves. Muslims have been given a leakage to kill provided it is within their laws. Example is when a woman is found guilty of adultery. Violent extremisms of the youth in stabbing each other because of reasons like women, robbery, and fun is not allowed by the Quran. One later asked the Sheikhs why they watched when youths in Dandora are transported to Somalia, the Sheikhs said that those Sheikhs who were involved were arrested and right action was taken.

The way forward was: Organize a match between the Muslims and the public, Invite more partners on board e.g. the Catholic nuns and priest and Christians to read the Quran and Muslims to read the Bible.

The Third Session was How To access loans by Kennedy and Mary from Youth fund.

Role of Youth Enterprise Development Fund is to empower youths financially. The loan is interest free, only 5% maintenance fee is deducted and a grace period granted is three months and the loans are payable within 12 months. To get the loan a group must attach registration certificate, their ID photocopies and a duly filled application form.

The awareness from the youth fund was a success because 52 people expressed interest in applying for the loans, the list was given to Youth fund officer and a copy remained with COTA who will now work together to see that all those people get the loans and will be present at the next forum to share with the participants who will be present.